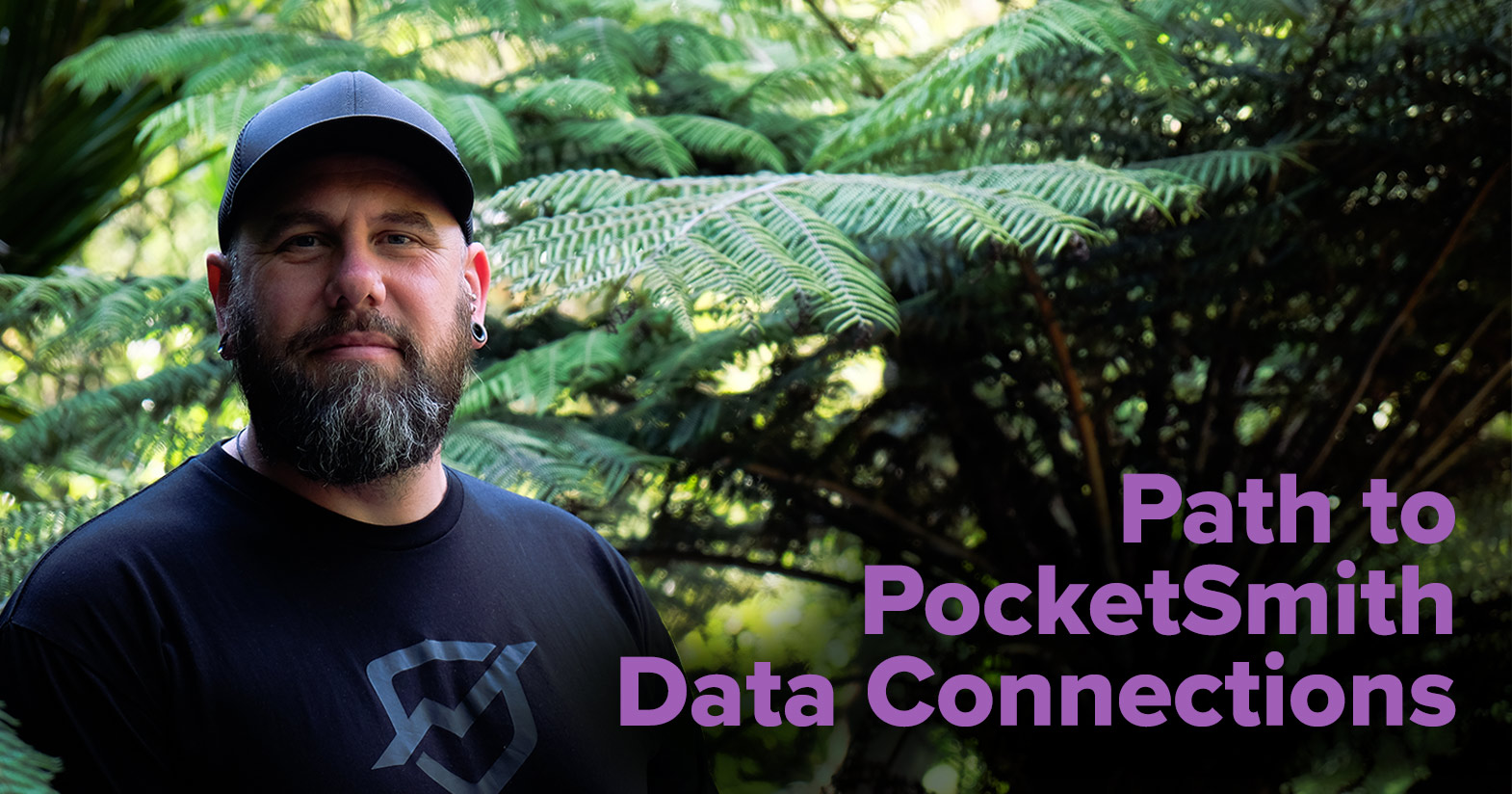 We've been rebuilding the technology that connects PocketSmith to banks, improving feed reliability and the experience of managing bank feeds. It'll also set us up for a future where you're able to freely connect to your data from multiple sources. Expect a public alpha release in February!

Automatically importing your transactions, accounts, and balances into PocketSmith is a vital feature. The insights that many of our users get are only relevant when transactions are up-to-date. While we’re one of the few products on the market that also lets you upload your own files, having this work done for you is a huge time-saver — to the point where many would consider automatic bank feeds to be a baseline feature for modern financial toolkits.

Bank feeds are like the water supply into your house. If you’ve ever experienced a water outage in your kitchen, you’ll know that while things are still roughly functional, everything is just a lot less convenient. You can still make beans on toast, but you can’t get water to boil an egg, and you can’t easily clean up afterward.

Analogous to this: if your key bank feeds can’t sync in PocketSmith, you can still import your transactions from files you download from your bank — but it’s a bit like doing the dishes with water you fetched from the well outside.

Our ongoing commitment to bank feeds

Because of this, we care about keeping your bank feeds operational like no other company. Our bank feed support team — Chye-Xian, Strahan, and Steph — work tirelessly to make sure your feeds work correctly, holding bank feed providers and banks to account when your data isn’t flowing as expected.

There’s evidence of this in the numbers. One of our bank feed providers recently told us that we submit 10 times more bank feed tickets than any other financial apps on their platform.

We are unashamed of this because it signals to us that we’re 10 times more proactive than other financial apps in ensuring reliable bank feeds for all our customers. We want every bank feed to work for every customer, whether you’re with one bank or 27.

We care because we believe you should have access to your data so you can make better decisions.

The fact remains, however, that these “water pipes” are clunky. Open banking is making its slow start, with the UK and EU having open banking legislation come into effect in September 2019 and Australia starting their open banking journey in July 2020. Despite this, quirks are rife. Brexit causing all our EU customers to need to re-authenticate. The PSD2 regulations don’t legislate access to all account types, with savings accounts only being included if the bank decides to. So while feed reliability is improved in the promised land of open banking, it’s still an imperfect landscape.

Controlling what we can control: our technology

Now, with the customer support side locked down, we’re taking our technology to the next level. We first offered automatic bank feeds by connecting to Yodlee in 2011, when PocketSmith was just myself and my co-founder, Jason. The software we built to bridge Yodlee and PocketSmith — lovingly termed Yodsmith — has served us well for a decade.

We’ve paid attention to the way the world is responding to consumer demand for data. We have chosen to invest in a significant upgrade that will not only improve your PocketSmith experience today, but into the future as well.

We’ve been building a totally new data feeds engine, which initially will feed your banking data into PocketSmith. But as the name “Data Connections” suggests, in the future, you’ll be able to pull in data from far more sources than this — for example, fetching asset and house values, share portfolios, and connecting to challenger banks. PocketSmith Data Connections has been engineered from the ground up by our amazing team to maximize reliability across our existing bank feed sources and flexibility in connecting to whatever data sources become available in the future.

In PocketSmith, the user interface is cleaner, with access to complete information about your bank feed status. You’ll be able to trace what happened when, and if you need help, our support team will have better tools at their disposal to work with you to get things working again.

What you can expect when switching to PocketSmith Data Connections

We’ll be staggering the rollout of the new bank feed system over the next three months. The transition will be smooth — once you’ve switched over, you won’t notice a difference elsewhere in PocketSmith.

Bank feeds will be more reliable, but we aim to let you get your feeds reconnected as soon as possible so you can get back to sorting out those coins.

The plan from here

A lot has already been achieved with the internal test versions we’re using right now, but we still have a way to go yet.

First, there will be a public alpha period, where you will be able to try out the new bank feeds in a test environment. A test environment means that you’d be trying things out using a static copy of your data from your main PocketSmith account. You’d log into your account on a special test URL, and changes made wouldn’t affect your main PocketSmith account — so you can try things without any risk to your live PocketSmith data.

Following this public alpha, there will be a few more release stages to ensure we have everything right. The full phases are as follows:

There are no certain dates around any of these phases, but we’ll communicate these as things become clearer. This brings us to:

Like our other recent large releases like rollover budgeting and the new Dashboard preview, we’ll use Reddit to provide frequent updates and insights. We will be communicating key dates around the above timeline via email and the in-app messenger too.

But if you want to see all the news as it happens, you can right now at https://reddit.com/r/PSDataConnections. Check-in regularly because the timing for the next phase will be posted there.

We’re excited about this next phase

It’s been ten years since we first introduced automatic bank feeds to PocketSmith, and in that time, we’ve witnessed the rapid digitisation of banking and commerce.

We earn and spend money at a greater velocity than ever before, meaning it’s even more important that we have seamless access to our data to ensure we’re on track. The open banking revolution has begun, so legislated access to your financial data may be within grasp.

Our commitment to you remains the same. We’ll continue to craft the most comprehensive and meaningful suite of tools to give you clarity and control over your money and lifestyle.

PocketSmith Data Connections is a big new step towards fulfilling this and puts us in a great position for moving into the future. We’re excited about sharing more with you very soon.

New Data Connections Partner: Akahu
We're excited to announce the introduction of a new data partner — Akahu — on the Data Connections system. This has been expedited specifically for users who bank with ASB, and you can establish a connection to ASB via Akahu right now. The ability to connect to other New Zealand financial institutions via Akahu is coming soon.