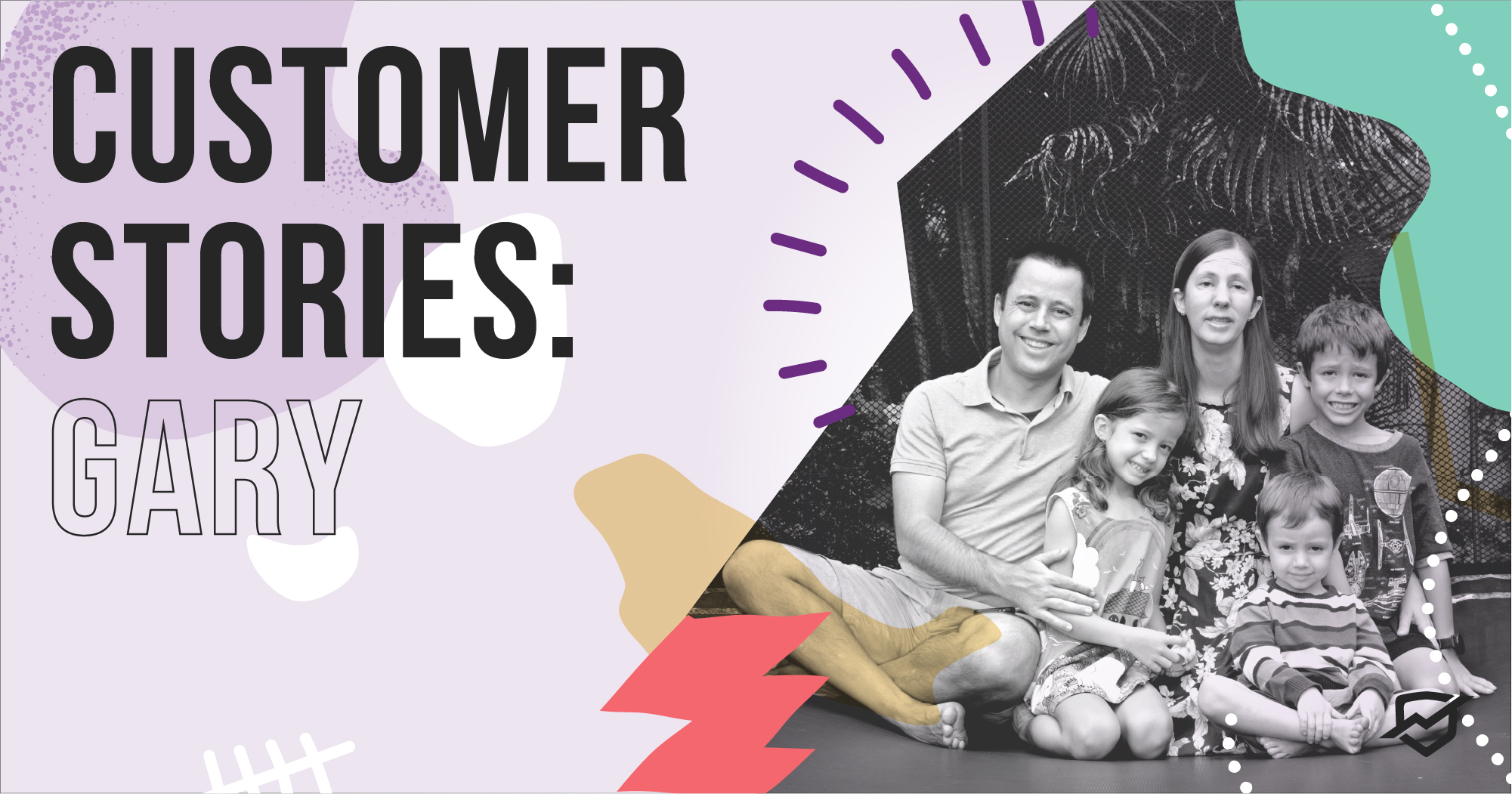 We asked some of our wonderful users to share how they use PocketSmith to be productive with their money and plan for the future. Their stories are filled with ideas, suggestions and inspiration on how you can start crafting a meaningful relationship with your finances.

Tell us a little about yourself?

Melita and I are in our late thirties with three children, two of which are at school. Melita has been an amazing primary school teacher for over 16 years as well as an outstanding mother, balancing family and career over the last eight or so years. I was an engineer for 16 years working in industrial automation, data analysis and product development, ending my career in a principal engineering role.

Although I have had a very exciting and interesting career, as I was moving “up the ranks” I was reflecting on my contributions to society and decided I wanted to take some time off to reflect, when I decided to change career. Prior to having children, my wife and I were fairly well disciplined in tracking our expenses and budgeting. We are the sort of couple where I would create a spreadsheet on major decisions like buying a house, having children, or working out what we’ll do with our children’s education.

How would you describe your role in your household?

We are both parents and we see a key part of our roles as providing a safe and supportive household environment as well as supporting our children on their journey to adulthood. I am currently studying a master’s degree in secondary learning and teaching while Melita is supporting us alongside savings we had accumulated prior to me leaving my engineering career.

What drew you to PocketSmith?

I had spent several attempts at developing my own tools to automate my budgeting processes but needed something urgently when I was planning on leaving my career. While there are lots of budgeting and cash tracking tools online, they seem to be either a traditional (boring) accounting package dumbed down for consumers or trying to do all the thinking for you and taking away your responsibility.

I searched reviews for cash tracking and planning software where PocketSmith was mentioned a few times. I reviewed the PocketSmith website and I picked up on company values that demonstrate social responsibility. PocketSmith was not just about being yet another money tracker, but came across as an agile company that is authentically interested in supporting its customers in developing sustainable spending habits and having control over their money and wealth generation. It is the humanistic aspect that was important to me first. After that, I trialed the software briefly to see if it met my criteria and got started from there. Also, being based in New Zealand was attractive as I like supporting local businesses (I’m in Australia).

How long have you been with us?

A little over a year.

What do you primarily use PocketSmith for?

When I first started it was to answer the question: “how long can we live off our savings?” After that, I needed to create a rough plan to understand what our finances would look like over the next year. Once I quit my job, it was “how are we going against our plan?” At the start of this year, I wanted to explore more of the account forecasting features (I was only using the cashflow report and high-level budgets last year).

Now we are using PocketSmith to help us develop strong habits in earning and spending. We really like Scott Pape’s work in the Barefoot Investor but have outgrown the very convenient system he recommends for budgeting. We have all our data in PocketSmith and when we want to buy something, we put it in our to-do list on Trello and then once a week over dinner we see how we are going and if anything coming up that we didn’t plan for, or if there’s something we did plan for and we just want to check how much is left in that budget. For example, when I finish my degree I will be buying a nice bottle of whiskey to celebrate so a couple of weeks prior we will sit and check our budgets and I will likely put a budget event in our PocketSmith calendar. I really like seeing how this impacts our accounts and the future impact of these decisions.

How has PocketSmith changed the way you do money?

We were already reasonably savvy with budgeting so last year it was just a really useful tool, although the level of transparency it offered motivated my wife to work hard to reduce grocery costs. We have come to realize that from not tracking our spending and losing our good habits since having children, a lot of money has probably been spent that did not add that much value to our lives. Last year alone we came in under our budget by a few thousand dollars. Now we are going the next step by building habits of only spending what we plan to, even if the plan is made on our budget date night and we spend two days later — at least we didn’t spend on the spot.

What are your favorite features?

I want to explore scenarios at some point in the future too!

There is a maturation journey when it comes to using tools like this. We don’t all start in the same place and if people tried doing what I do now, it would be overwhelming. I recommend starting slow and finding small steps that make you feel more certain about your finances. I feel that step one is just getting data in and setting up budget categories. Really make an effort to think about what bank account or credit card is associated with your budget. With that little upfront effort, the account forecasts are awesome.

When starting, think about what you want to gain from this. Use your data to make decisions that motivate you such as buying something special, or in my case, leaving my career. What is really cool is that by getting used to the product over time while using it to achieve something meaningful, I got to this point where I am not worried about money at all because I can see where it is and where it will likely be in the future (even though we only have a few months where we can afford to live off just my wife’s income). We have never followed our plans perfectly, but our account balances don’t show it because in some areas we spend more, some we spend less and we allow for this breathing space.

Scott Pape recommends an account called the “Fire Extinguisher” where you put a sum of money for an emergency. We have a fire extinguisher budget that rolls over each month and gives us wiggle room, I really recommend it.

What’s the best money decision you made in the past 12 months?

My major spending decision has been dropping my income and going back to study. By leaving my career I had to let go of all the future dreams of retiring at 50, going on big holidays, buying toys… I have had to change a lot on how I see the world because while having wealth is great, being happy is more important. We are not frugal nor are we frivolous, I would like to say we want to be thoughtful. 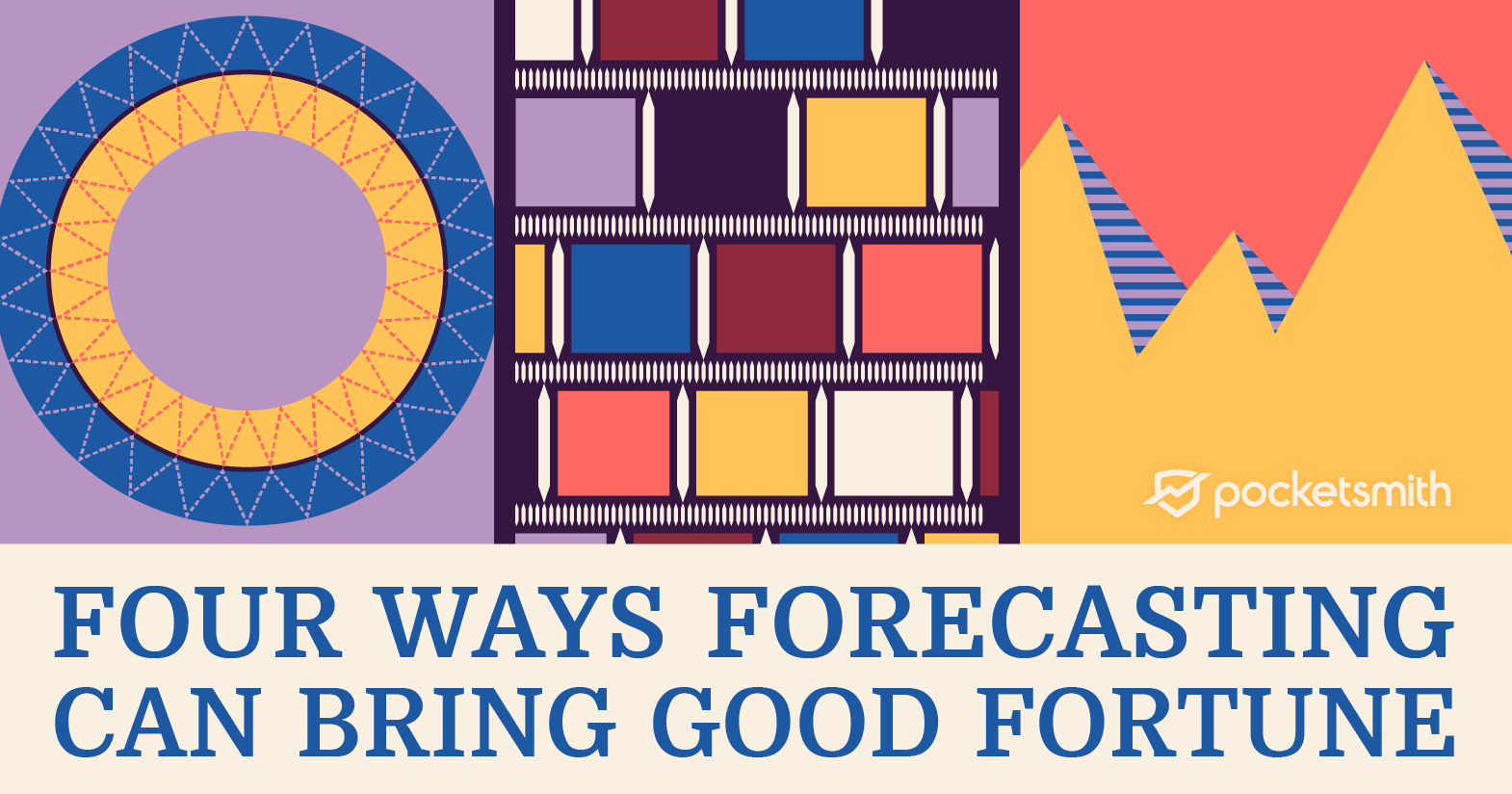 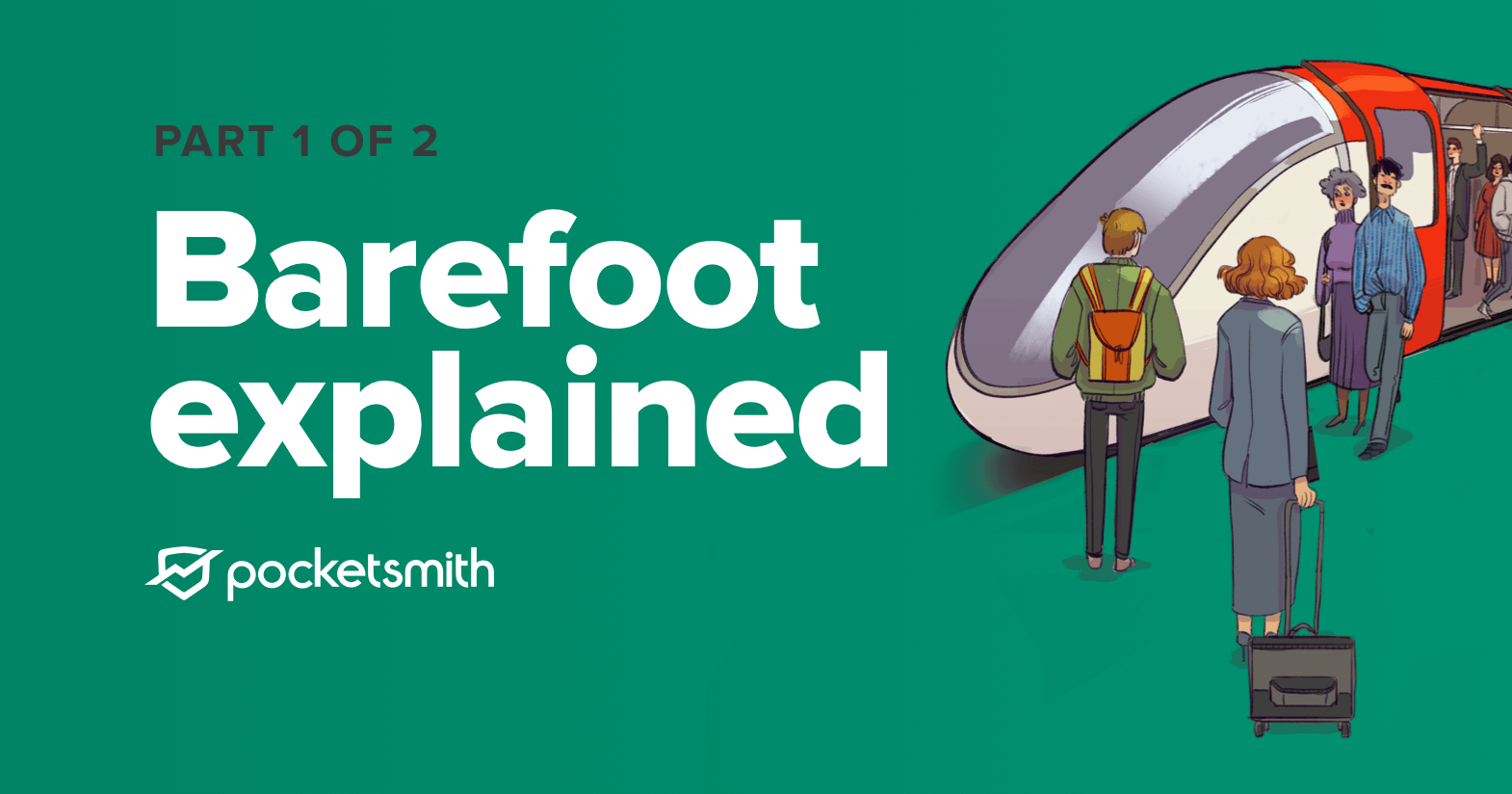 The Barefoot Investor ‘Buckets’ and ‘Accounts’ explained
If you’re looking for a celebrated financial plan to help you take control of your money, we encourage you to read this post, watch videos and to get a copy of the book. 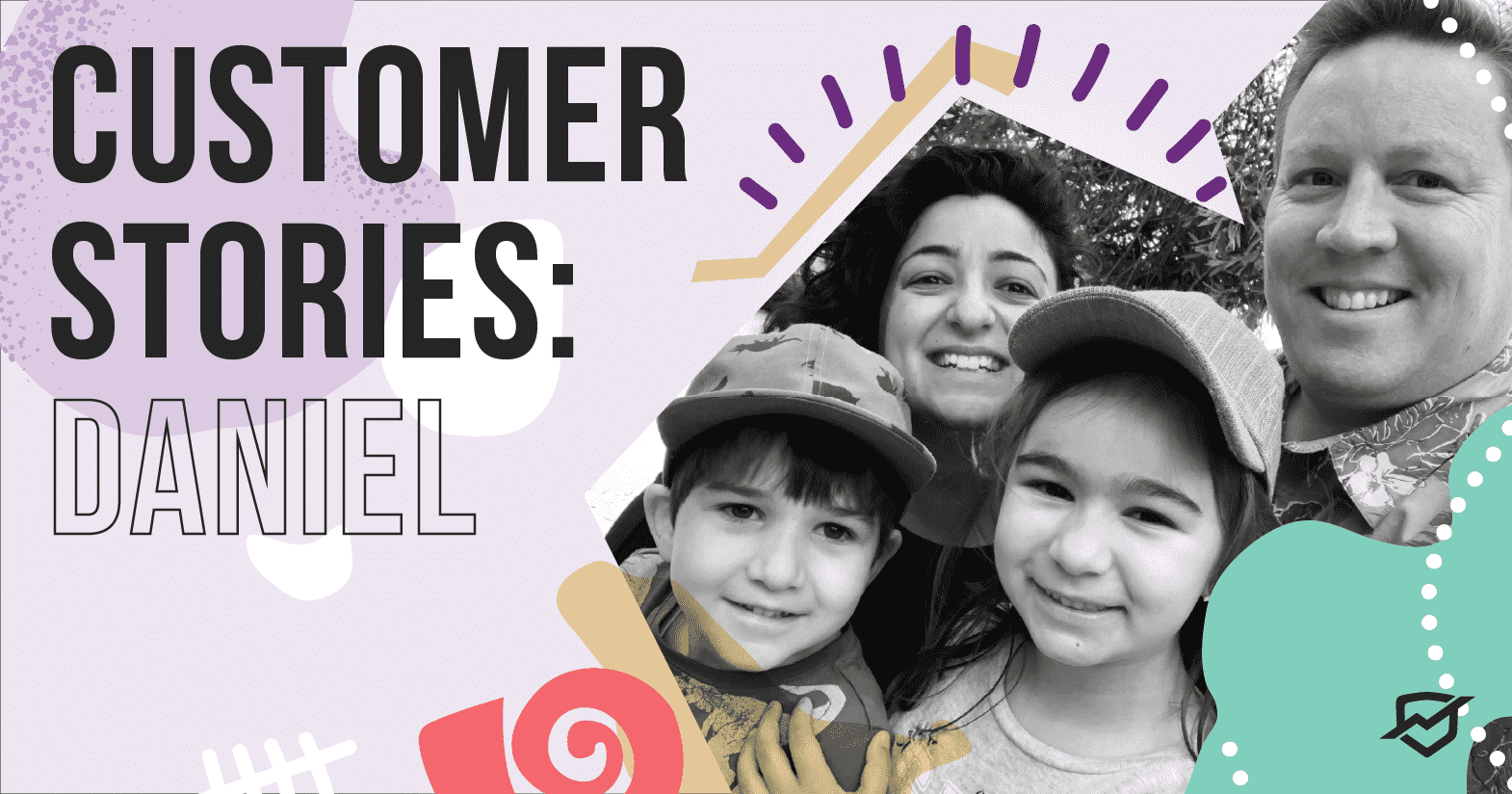 How Daniel Uses PocketSmith to Manage a Very Busy Household of Four
We asked some of our wonderful users to share how they use PocketSmith to be productive with their money and plan for the future. Read how Daniel turned the chore of doing the family budgets, checking the credit card statement, and looking into transactions into an enjoyable experience!